Do you want a reprint with that? My 'bad pharma Friday'. 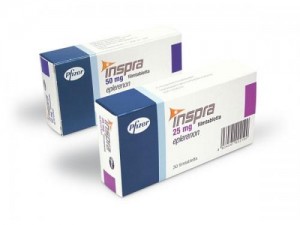 "Yes", I said, vaguely remembering the debate on aldosterone antagonists from a couple of years ago but not being able to recall exactly what it was all about.

We had a presentation in the hospital from a Pfizer rep on their drug eplerenone (Inspra) and it went through the results of the EMPHASIS-HF trial [1] talking about how that  has affected the European Society of Cardiology guidelines for heart failure and how the local cardiologists apparently 'use it anyway'.

A reprint of the EMPHASIS-HF trial was offered and I then saw that, yes, it was a Pfizer-sponsored trial of eplerenone against placebo. Also, it did not include the accompanying editorial in the same issue of the NEJM by Paul Amstrong.

There are two issues here:
Now I'm no cardiologist and I haven't ever prescribed eplerenone but, to me, my 'bad pharma Friday' looked like a bit of a demonstration of nice outcomes data of a slightly better tolerated but patented expensive drug versus placebo whilst hiding the real debate about its position in the treatment algorithms compared with another effective, off-patent, much cheaper drug.