Giving a talk tomorrow on Moodle and how it is best used as a course management system and virtual learning environment.

I've had over 6 years of experience with Moodle now and even though I'm not as good as our resident Miss Moodle I know my way around under the bonnet.

Moodle stands for Modular Object Orientated Dynamic and caters for small or large, primary school or postgraduate. There are over 65,000 registered sites, in 219 countries, with over 56 million users, 94 million forum posts, and 99 million quiz questions (how many duplicates I don't know).

It is Open Source with 283 developers worldwide and has a public development roadmap.

It lends itself very well to the Postgraduate Diploma in Diabetes course with University of Leicester and BMJ Learning. Since the students are all postgraduates they have a lot of experience to share. A facilitated discussion where they can build knowledge and academic skills in diabetes is greatly helped by the flexibility of Moodle. A social constructivist pedagogy.
Posted by Unknown at 16:00 No comments:


I took about 600 recent tweets with the hashtag #NHSbill and analysed them for word clusters using Latent Dirichlet Allocation (a hierarchical Bayesian technique). I've been thinking of building a tool that could (1) help identify discussion themes, (2) find related tweets, and (3) suggest tweeps that have similar or different views to your own.

This is a stab at step (1). The following collections of words are summaries of the discussion themes and, given that it's Twitter, associated tweeps (hope you don't mind the associations) and links.

What was frustrating was that @profchrisham kept popping in and out of the model as I was fiddling with the stop word list ('a', 'the' ,'and' etc.). Supportive voices for the bill were uncommon in the sample of tweets so I might go for a bigger sample. Like I said before, maybe I need to find a debate that is less, eh, one-sided, on Twitter.

Just finding discussion themes, step (1), can be a way of following the various threads in a Twitter hashtag live meeting - if could be done live.
Posted by Unknown at 00:22 2 comments:

So, I thought it would be good to look at ways to find people with opposing views. It is easy to fall into a social media niche where you only talk to people who share the same views as yourself.

I picked a topic which is highly debated #NHSbill to see how easy it would be find individuals. I've been building some classification software that I thought I'd try it out on.

I looked through all the entries and found plenty apparently opposing the bill but had difficulty finding views in support of the NHS reforms. I started thinking maybe I should find another topic that's more balanced as it would be hard to classify #NHSbill tweets. However, I did spot this one

But, just below that tweet, a few days previously, I noticed a tweet about Molly from Kenya. 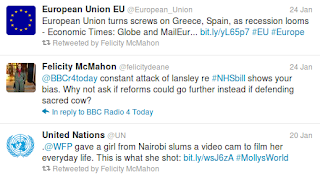 Molly lives in a slum in Nairobi, Kenya and was given a small video camera by the World Food Programme. She has a YouTube channel with excerpts from what she filmed.


Kenya is something that has great importance for me as we have been involved with a Kenyan charity for orphaned children in west Kenya called Mercy Rescue Trust. I hadn't heard about Molly's video channel though.

A good find I thought. Wait! That's an example of the reason for looking outside your local social media network.

This type of serendipity is important for social media. I realise it is well documented before and seen by many as a great reason for building a network of contacts. It struck me as a particularly good example and thought I'd share it.
Posted by Unknown at 12:47 No comments:

Had an update on the end of life management policies in Cornwall through the Gold Standards Framework (GSF).


"[GSF] was first piloted in Yorkshire in 2001 in Phase 1, followed by a national phased programme supported by the NHS, Macmillan and more recently the DH End of Life Care Programme. An intrinsic element of the work has been the internal and external evaluations, originally using questionnaires and more recently the on-line After Death Analysis audit tool, plus several independent University based evaluations, which contributed to the further development of the work. National spread was enabled through a strategic national cascade plan with the GSF Central Team supporting local facilitators, enabling best implementation of the work, overseeing training and audit plus developing further adaptations and resources."

Recent progress in Cornwall includes the adoption of the same version 12 of the Liverpool integrated care pathway for the dying patient (LCP) in primary care, secondary care and care homes. There is ongoing negotiation about the implementation of the GSF in Cornwall.

These approaches both originated from examples of best practice in the NHS. The LCP from the NHS Beacon Programme in 2001/2 [1] and the GSF at a similar time being taken up by the National Council for Palliative Care from 2003. They are both widely adopted. I'm looking forward to reading more about the evaluations they have undergone [2,3] and the particular challenges of evaluating this type of quality improvement [4]. Do they make a difference?[5]

Great talk at the Truro Grand Round today on irrational thinking, cognitive bias, and generally things psychological that affect medical decisions and the behaviour of healthcare professionals.

It included this classic video of selected attention. Basically it was introduced as follows - "There is a gender difference in detailed attention. Watch this video very carefully and count exactly how many times the white team pass a basketball to each other. They will move around a lot so count carefully and we'll see who does better - male doctors or female doctors."


About half of those in the room had excellent sensory attention and the other half, including me, did not notice one thing in particular.

Would the telehealth / telecare community and the evaluation team of the Whole System Demonstrator Programme please get their act together? If you are sceptical then be scientific. If you are frustrated at the slow uptake of technologies then be political. Don't try to mix the two.

The UK Department of Health (DH) funded research on telehealth and telecare, the Whole System Demonstrator programme, had its 'headline findings' published in December 2011. A press release described it as


"The Whole System Demonstrator (WSD) programme is the largest randomised control trial of telehealth and telecare in the world, involving 6191 patients, 238 GP practices across three sites, Newham, Kent and Cornwall.  WSD was set up to look at cost effectiveness, clinical effectiveness, organisational issues, effect on carers and workforce issues.  It focused on three conditions, diabetes, COPD and coronary heart disease.  The programme will provide a clear evidence base to support important investment decisions and show how technology supports people to live independently, take control and be responsible for their own health and care."

On 19th January 2012 Paul Birstow, Minister for Care Services, announced a Concordat with industry "to enhance the lives of three million people over the next 5 years by accelerating the roll-out of telehealth and telecare in the NHS and social care".

The headline findings of the Whole System Demonstrator, described by DH as one of the most complex trials it has undertaken designed to answer the question "Does the use of technology as a remote intervention make a difference?" are impressive.

However, there are a number of questions about the study:
I have a prior belief that telehealth and telecare is effective. I suspect it would be useful for certain types of patients but it may not be beneficial for all. For some it may be harmful by leaving them remotely managed but requiring face-to-face care. I'd like to be able to answer accurately the patient who asks me "so this remote monitoring equipment is going to work for me is it?" or the Medical Director who asks "Hey you're a techie type aren't you? How much of our budget should be assigned to this telehealth / telecare stuff?" I'd like to answer those uncertainties with some data.

See also:
Storify of Twitter discussion and links about #WSD
Paper by Davies & Newman on evaluating telecare and telehealth interventions including a description of 'pragmatic RCT'
Whole System Demonstrator (in Cornwall)
Posted by Unknown at 11:00 2 comments:

Case presentation and discussion of stroke mimics at the lunchtime meeting. Can't remember the exact details of the case but it was someone presenting with acute ischaemic stroke being considered from thrombolysis - the learning point was "but what about those conditions that may present as stroke but are not?"

Good discussion at the lunchtime meeting today about the recent study, reported in the NEJM, on the use of low-molecular weight heparin vs. placebo in medically ill patients - the LIFENOX study.[1]

All the patients (who were medical inpatients with CCF or severe infection with one risk factor for venous thromboembolism or had a diagnosis of cancer) had TED stockings and either enoxaparin or placebo. The authors wondered if the TED stockings did a good enough job of preventing VTE.

A Now@NEJM blog about the study provides a good overview and which points out:


"Although elastic stockings with graduated compression have been shown to be effective in reducing the risk of deep-vein thrombosis in moderate-risk surgical patients and other medical patient populations, the use of stockings  did not prevent the occurrence of deep-vein thrombosis in patients recuperating from severe, disabling stroke who  were participants in the Clots in Legs or Stocking after Stroke trial (CLOTS)."

Another interesting point about the study is that it involved sites less commonly seen in publications - China, India, Korea, Malaysia, Mexico, the Philippines, and Tunisia.

Time to retire the PDSA cycle?

We are told that the Deming (or Shewhart) cycle of Plan-Do-Study-Act, originally described in 1950 as a quality improvement tool, can help in the following ways:

"Using PDSA cycles enables you to test out changes before wholesale implementation and gives stakeholders the opportunity to see if the proposed change will work." NHS Institute of Innovation and Improvement

"The Plan-Do-Study-Act (PDSA) Worksheet is a useful tool for documenting a test of change." Institute for Healthcare Improvement

It is sold as a 'scientific method' dating back to Galileo and Francis Bacon.

I beg to differ.

I think it is not fit for its wider purpose promoted by its proponents as part of a culture of overall quality improvement in healthcare.

It is good at improving the issue that it is targetting but only when it is in isolation. Seeing healthcare as an industrial process that consists of conveyor belts of treatment pathways that are separate from each other is not how I see the world. This PDSA cycle is good for manufacturing where the process can be controlled and isolated but healthcare is more complex. There are uncertainties about which patients should be on which pathways. Patients have more than one condition or require more than one treatment and the simple view of a PDSA cycle (which is good at improving car manufacture) is too simple for the real world of clinical medicine. Yes it can be used as a strategy for a single focussed task in medicine but it is not fit for using more widely as it is too dumb a tool for the job. In short it is a good 'in vitro' tool but not so good an 'in vivo' tool.

Is it time to recognise PDSA cycles for what they are; useful tools for focussed tasks but too simple an intervention to be used widely in medicine where it may do more harm than good?
Posted by Unknown at 13:28 1 comment: