Attended the Elderly Care departmental meeting at Truro where there was an interesting case report of Parkinson Disease diagnosed 10 years previously and who then presented with some features of Systemic Sclerosis and quite marked basal ganglia calcification on the CT.

It was an odd collection of signs and there didn't seem to be any unifying diagnosis. Fahr's disease was discussed and prompted me to find a review. (1)

There was also a discussion about when a CT brain is indicated in 'routine' Parkinson patients.

A possible future for CME?

Pedagogical Ecology is a lovely jargon term originally from Jaffee and used by Nada Dabbagh & Rick Reo in Back to the Future: Tracing the Roots and Learning Affordances of Social Software. In Lee MJW, McLoughlin C (Eds). Web 2.0-Based E-Learning: Applying Social Informatics for Tertiary Teaching. IGI Global; 2010.

They use it to describe a trajectory for e-learning from traditional broadcast media to social software learning environments in tertiary education. Could the same trajectory be true for Continuing Medical Education CME (though perhaps delayed by a few years)?

I've summarized it in this PowerPoint on Pedagogical Ecologies in CME. 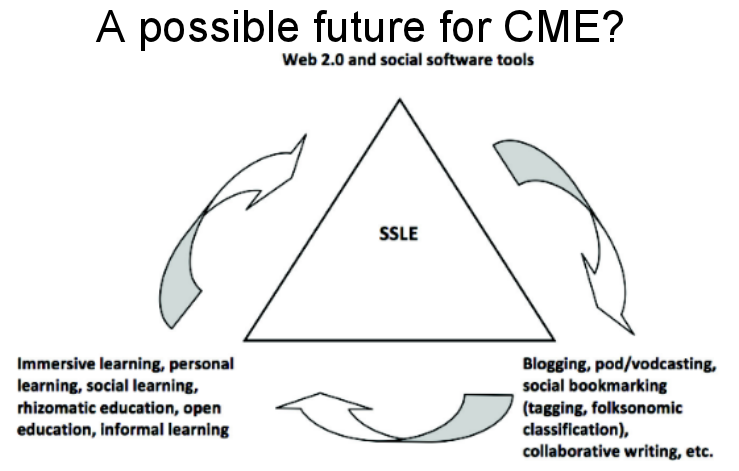 I think it is a useful tool for exploring where our current CME activities can be placed, where our learners might be and where we may want to move to (or not).
Posted by Unknown at 15:23 No comments:

Just came back from a fantastic family holiday in India organised by Janet and Peter at Brambles Art Retreat. Clare and Molly were the artists and we were the 'support team'. We stayed at the marvellous Karmi Farm which is just North West of Darjeeling and run by Andrew Pulgar-Frame and his mother Deki.

There is also a Karmi Farm Clinic staffed by a young, local man, Siroj who spoke excellent English and had worked there for 5 years. The clinic serves a population of about 3000 who live in the local area in small, humble homes of wood and corrugated steel. The clinic is supported by Nomad Travel and also extensively by Andrew.

The clinic is principally a triage and first aid centre. When we were there it was staffed by Tom and Emily from the UK on a tour of voluntary work. They could handle most things without needing to send patients on the 4 hour bumpy jeep trip to the nearest hospital.

What amazed me most was not the monk who had nearly sliced off his palm with a Kukri that Tom stitched together on and improvised operating table in open air, or Clare using her dental skills in between painting to describe to Tom and Emily how to take out a tooth using a Leatherman multi-tool, or the house visits up extreme paths through the hills, or the copious amounts of "HIT Super Strong (for sale in Sikkim only)" being drunk by all the locals. No ... it was the fact that almost all the booking, follow-up arrangements, and advice was given over the mobile phone by Siroj the local worker who was clearly trusted by the clinic's community.

In this reasonably remote and poor area of West Bengal, where the clinic sometimes lacked lignocaine and dressings, where the people walked in flip-flops for several hours to seek advice they had a local community health care worker who dealt with a community twice the size of most single-handed GP practice lists using mobile technology.

I left wondering how best to practically support such an outpost or others in similar situations in developing countries. Local, trusted, community health care workers may be providing a lot of care to some of the most vulnerable of people and often outside any formal Government health programme. What can be done to support them?

Here are some ideas:
Would be interested to hear some others.
Posted by Unknown at 13:34 No comments: